The 100%-owned Pyramid Hill Gold Project was staked in late 2017 and now covers an area of >5,000km2, predominately in the Bendigo region of Victoria, north of the high-grade historic >22Moz Bendigo Goldfield and the ~9Moz Fosterville Gold Mine owned by Agnico Eagle (NYSE : AEM), one of the world’s highest-grade producing gold mines.

The Bendigo Zone of Victoria has produced >60Moz of high-grade gold. The region has been mined since the mid-19th century, however, is now capturing global attention once again, largely due to Agnico Eagle’s new ultra high-grade discoveries at depth at Fosterville.

The ‘Gold Undercover’ initiative by the Victorian Government in 2006-2009 estimated a potential ~32Moz (P50 mid-case) of undiscovered gold beneath Murray Basin cover in the Bendigo Zone. However, the vast majority of the covered area remains sparsely explored. Given there is highly variable, shallow cover over a large portion of the Project, the Company believes that there is excellent potential for the discovery of new commercially viable gold deposits 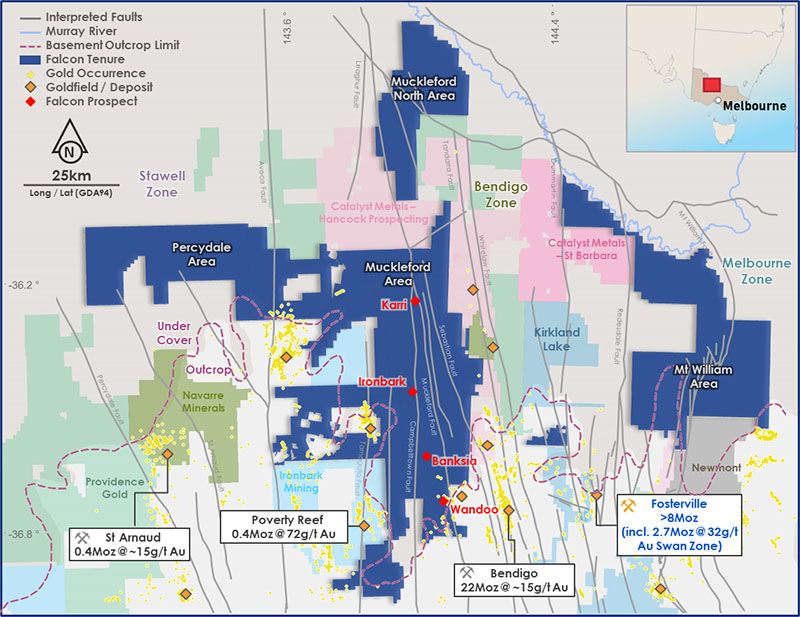 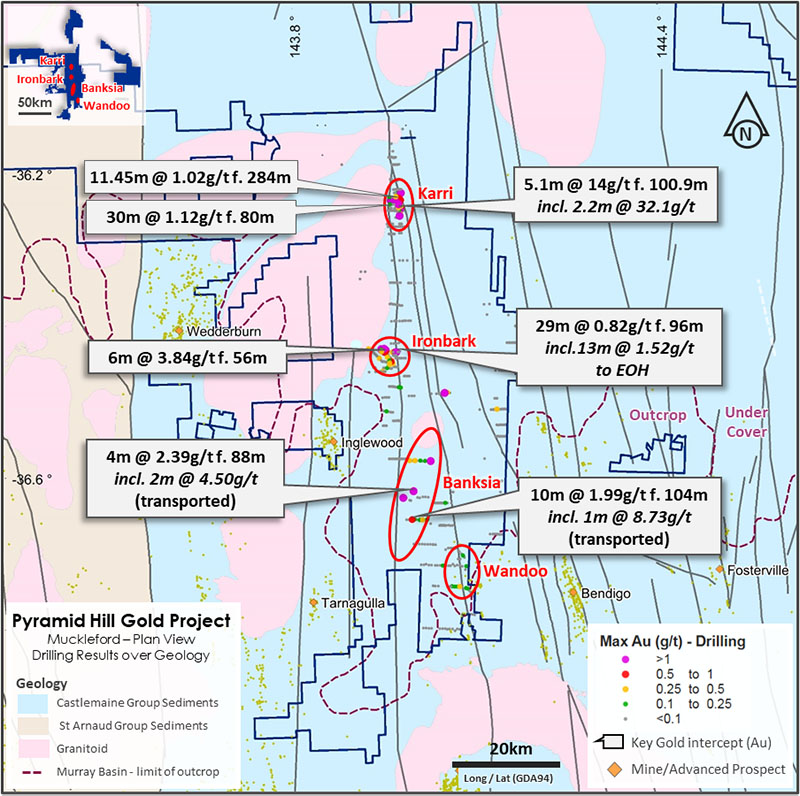 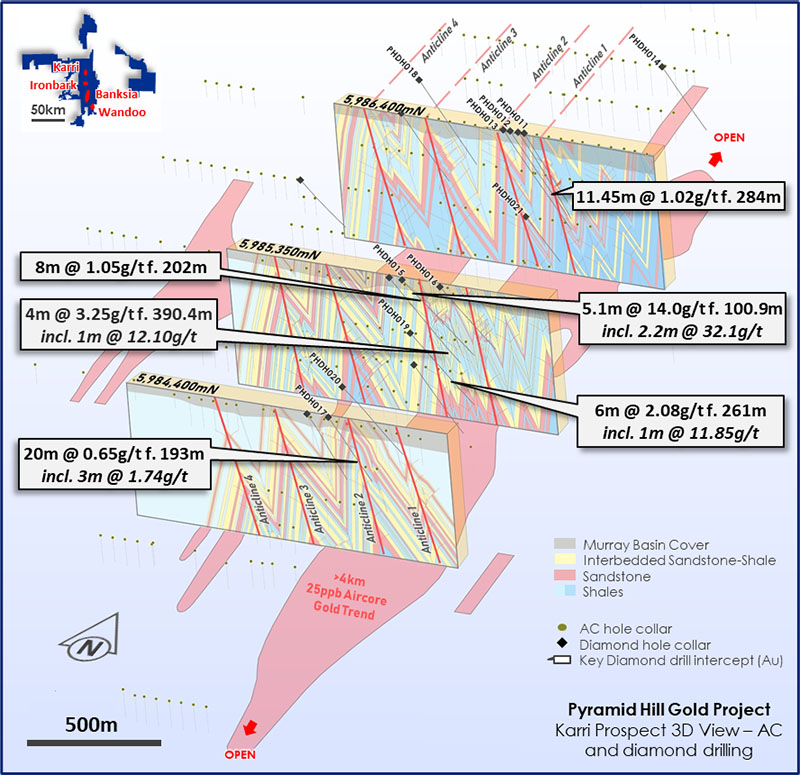 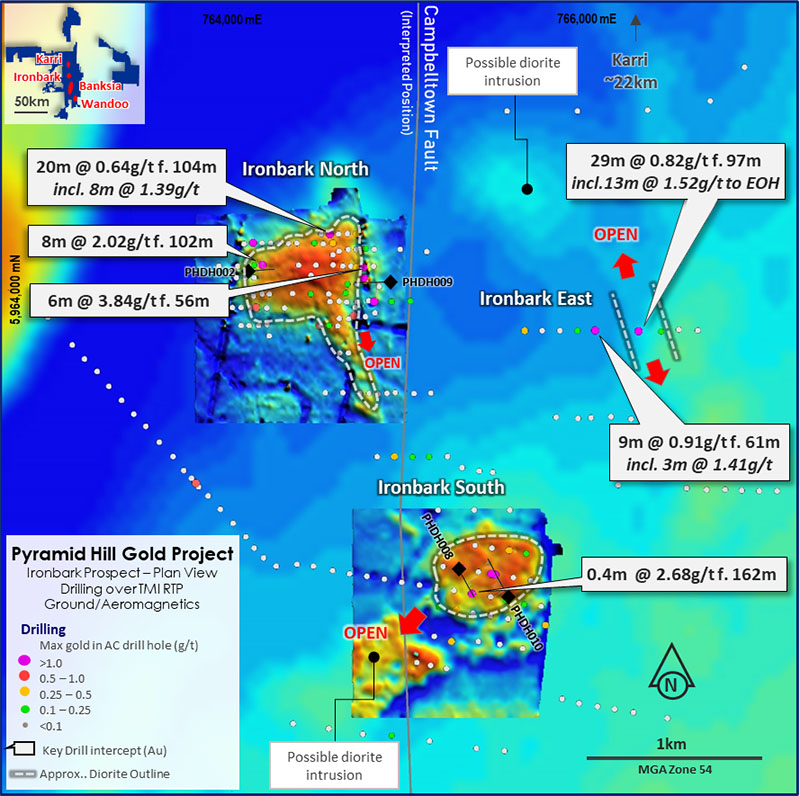 Low-cost reconnaissance air-core (AC) drilling to the top of the target basement on wide-spaced lines is currently being used effectively to narrow the target search space over the very large project area. More than 1,100 drill holes have been completed to date, outlining multiple high-priority prospects. Diamond drilling will be used to vector towards high-grade gold under cover.

For the latest information please refer to our Investor Presentations and ASX Announcements. 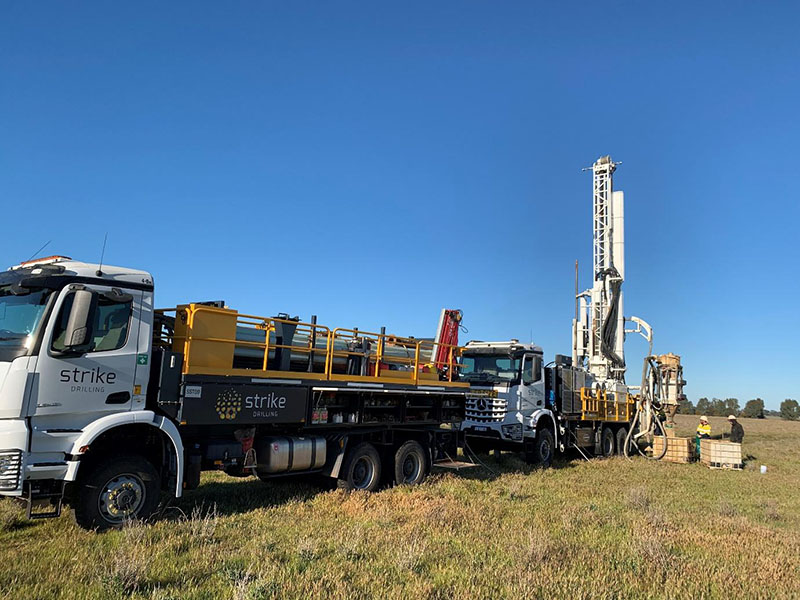 The Bendigo Zone is located within the Lachlan Fold Belt, one of the major components of the Tasman Fold Belt System. Geologically, the Bendigo Zone is located between the Avoca and Mount William Faults which separates the Stawell Zone to the West and the Melbourne Zone to the East and is largely composed of turbiditic sediments (typically sandstones and shales) of the Castlemaine Group which is host the majority of gold deposits.

The Stawell and Bendigo Zones were deformed during the Benambran Orogeny, a lengthy interval spanning the Late Ordovician (c.460-444Ma) and Silurian (c.444-419Ma). The Melbourne Zone by contrast escaped this Ordovician-Silurian deformation and continued to receive sediment until it was eventually deformed during the Middle-Devonian (c.380-370Ma) during the Tabberabberan Orogeny.

The structural style across the Bendigo Zone is relatively uniform, controlled by relatively simple east-west oriented compression and characterised by simple, upright, tight chevron folding. Widespread post-tectonic plutonism occurred during the Early Devonian (c.410-400Ma) which played only a very minor role in deformation across the region and is not associated with any significant gold events.

Orogenic gold deposits within the Bendigo Zone are diverse and often complex but share similar origins and geological characteristics. Mineralisation was episodic during the Ordovician-Silurian periods (460-420Ma) driven by crustal heating during the Benambran Orogeny, from the beginning of fold development to late-stage tectonic faulting.

The surface footprints of major gold deposits in the district are commonly narrow but strike extensive and can occur over multiple kilometres. Typically, major deposits are located within the hanging walls of, but distal to, major crustal scale structures which are themselves not mineralised. These regional structures have been interpreted from 2D seismic surveying completed by Geoscience Australia and provide an important structural framework for exploration activities.

At the deposit scale, high-angle secondary reverse faults and dilational cross structures served as conduits for the mineralising fluids. In addition to the fault-controlled mineralisation, where accommodation occurs at the apexes of tight fold hinges, mineralisation can occur as stacked ‘saddle’ or ‘trough’ reefs as commonly seen within the Bendigo area.

Get the Latest Updates from
Falcon Metals